Home » A Hidden Treasure in India 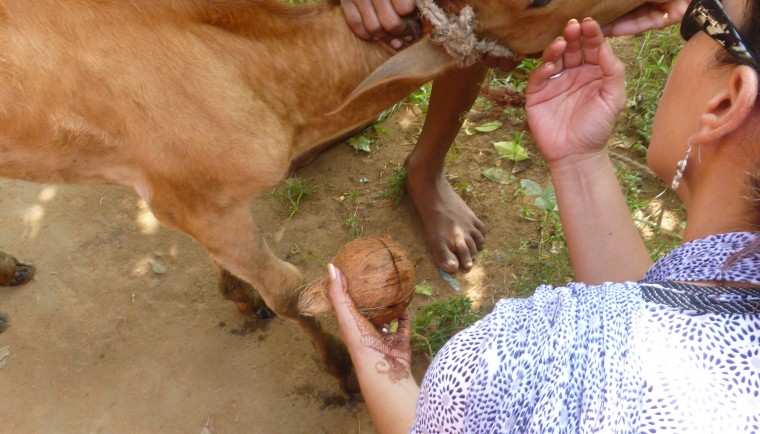 A Hidden Treasure in India

In my book A Chocoholic’s Sacred Journey I describe a meeting with a young, shy, messenger of God—an oracle. Was he like the oracle in the movie Matrix? No, he was a humble, simple man whose dedicated devotion to God was unsurpassed.

My friend Uma and her father in Feb 2009 escorted Suzana, Kashmir and myself to the oracle’s rural village in Orissa. It was one of the most memorable, deeply moving, soul-changing experiences I had ever had in my entire life. 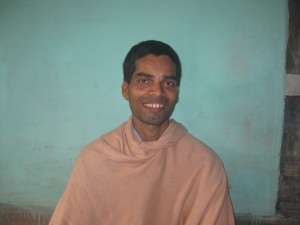 I wrote “It was the first time in my whole life that I genuinely felt the physical presence of God. It was the first time I experienced the complete essence of the word and could perceive the word “God” so naturally, for in my past, God to me was “Source.” God truly touched my soul that day and I never felt so loved and supported.”

One of the messages that the young oracle relayed to me was that I would attain Moksha in this lifetime. I had been told that several times during past Vedic astrological and naadi leaf readings, but to actually hear the words expressed directly from God to me was the biggest gift I could have ever received.

During my reading the oracle prescribed several things to help protect and strengthen my spiritual work. A particular unique one was to bow down to the feet of a calf in honor of Krishna. When all three readings were completed we headed to see the next oracle scheduled for that same day. Arriving several hours late for our second oracle appointment we got lucky and were informed that we could go in next—ahead of the 26 people already waiting. Trying to avoid the stares and glares, I glanced outside the small window of the outer-waiting room and directly across the dirt path was a small shanty with a mother cow and her new baby calf. I burst out the door and ran over and gently cooed to the baby calf to come over to me. As he hesitantly left his mommy to amble over to me, I bowed my head to beautiful Krishna and he gave me the sweetest kiss ever. 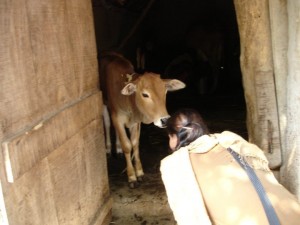 Fast forward 20 months ahead and I have just recently returned home from another three-week journey to India with the major driving force being an intense desire to speak again with God. My second encounter with the gentle oracle was even more extraordinarily mind-blowing! The first most significant thing he said to me was that I was going to have a direct conversation with God. How cool would that be? To become a member of the “Conversations with God Club” would truly be a miracle. My entire reading was profoundly beautiful accept for one thing — I was terribly disappointed that the oracle did not repeat the possibility of attaining Moksha. Kashmir’s reading followed and at one point, the young oracle stated for the second time that she would attain Moksha in this lifetime. As soon as I heard her proclamation, my monkey mind started to spin—debating with myself over losing the window of opportunity to receive the boon and screwing up my life so horribly that the reward was now beyond my grasp. When all the readings were completed and the oracle was gently, with deepest reverence, tending to the swaddling and stowing of his sacred palm leaves, he looked up at me and softly said, “God wants you to know that you have already attained Moksha.” I was flabbergasted…God had actually heard my inner crazy dialogue and wanted to soothe and restore the confidence of my inner-spirit.

For this most recent visit—one of my spiritual prescriptions was to pour coconut water over the front feet of a baby calf…Really?…What’s up with baby calves and me? Hearing that, I immediately thought what are the odds that will ever happen?

Finally after 2 ½ hours of sitting in very dim lighting, we stepped out of the oracle’s puja into the brilliant sunlight. As our eyes began to adjust, lo and behold, what was the first thing we saw? Barely 4 yards away was a baby calf innocently munching on some grass. For the next 30 minutes the drama that instantaneously enfolded was a scene set into motion, produced and sponsored by the all mighty director—God himself! The oracle’s brother solicited the young neighborhood boys to retrieve the calf that took off at lightning speed as soon as they approached. It was so adorably comical to see the three young imps gleefully running through the village and in and out of the trees trying to catch the mercurial four-legged one.

Meanwhile the oracle’s brother shimmied up a nearby coconut tree and collected a fresh coconut for the upcoming bathing ritual. After 20 minutes, a single very proud sweaty boy came strolling down the lane with rope and baby calf in tow. They tied him up to a small tree and as I carefully bent down to soothe the anxious calf I slowly poured the fresh coconut water over his front two hooves. Miracles are a glorious thing! 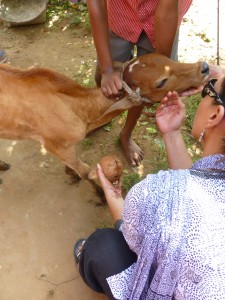 I wrote in A Chocoholic’s Sacred Journey:

“Throughout my journey, Moksha (Sanskrit for self-liberation and enlightenment) has been forecasted for my future. Attaining enlightenment for me means I have accomplished several things: I have stepped fully into my light and from its constant brilliant rays I know exactly who I am; I have healed any and all emotional issues that have kept me from achieving my highest goals and deepest dreams; I am self-realized in the sense that I am completely aware and gracefully accept the gifts I have to share with the world; I know without a doubt what my highest purpose for this lifetime is; I am living a life filled with nonresistance, nonjudgment, acceptance, and daily manifestations of undeniable ecstatic grace and joy; and I have come to a place within that I acknowledge and honor the beautiful, compassionate, loving, worthy, perfect soul that I am.”

After much pondering over the pronouncement of having attained Moksha and reviewing my definition of it—I am not really sure if I completely concur with the young oracle’s message. However, I do have to admit I am in a place of deep peace and crystal clarity. The only thing I truly know is that I will continue to travel back to India to visit the young oracle for more conversations with God…at least until the day…I get that direct call.

2 comments on “A Hidden Treasure in India”