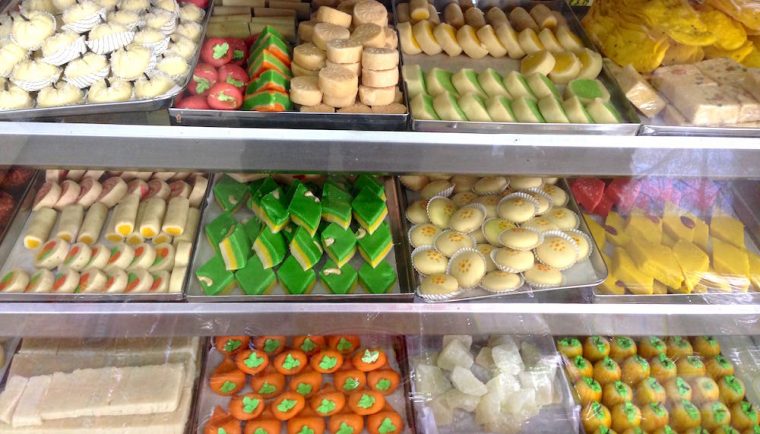 Am I a foodie, epicurean, gourmet, gourmand, gastronome or glutton?

My answer is “Heck yah!,” accompanied with a resounding “Amen” and “Hallelujah!”

From an almond-butter-and-honey sandwich to grilled vegetable paella or tabbouleh—my beautiful love affair with food continues to nourish my body and gift my mind and spirit with scrumptious JOY!

It’s pretty hilarious that this piggy-wiggy loves to eat but does not know how to cook, nor does she care to learn. Maybe my right bicep is larger from phoning in food deliveries, and I know the life stories of most of the Whole Foods and Aloha Salads employees at Kahala mall, but bottom line, no matter the means or vehicle, my delectable relationship with food sizzles on! Anyone who knows that my husband Eric is a restaurateur will laugh that his fabulous wife’s gourmet repertoire includes PB&J and tuna sandwiches.

One of my most savory guilty pleasures is a really good buffet! I have dined for hours at some of the best buffets around the world. One of my top 10 is the international food buffet in the Leela hotel in Gurgaon, Delhi. The multiple choices of heavenly cuisine are mouth-watering, and on every yearly trek to India, this buffet dinner is always on our itinerary.

One day, during our trip to India last year, Corey came up to me and teasingly said, “Word on the street is we are staying at the next hotel because you have to HAVE the buffet dinner.” It was pretty funny being called out on my obsession, and I had no clever retort, because it was so dang true! It was quite the ongoing playful joke until we checked in early to the Leela Hotel, and ended up having the buffet for lunch and dinner. To 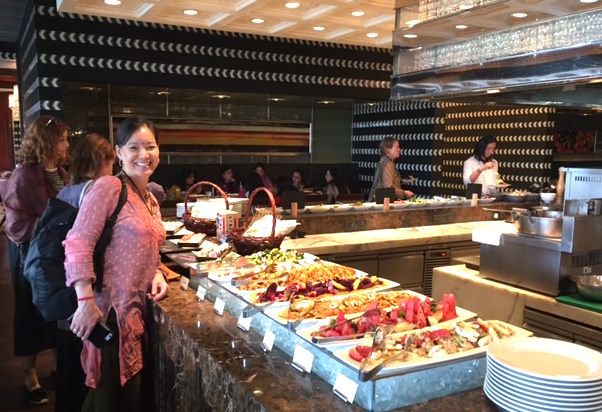 be able to gorge on sushi, sashimi, raw green salad with raw salad accoutrements, pho, pad thai noodles and chocolate melted brownies is akin to finding a deep, clear, cool lake after walking in the desert for days. My joker friends literally had to eat their words after experiencing gourmand moksha!

That night at the buffet was one our more boisterous ones. Leslie was going home the next day, so it ended up being a farewell party. This buffet is unique because it offers free wine and whisky, and as a result, everyone got a little loopy. Juliet delighted us with an impromptu Hawaiian chant and Jean Jean followed with her own rap/chant version of the Maha Mantra. We were making such a ruckus that the restaurant turned up their house music louder (classic restaurant 101 move). Bad play on their part as we just got louder and louder. 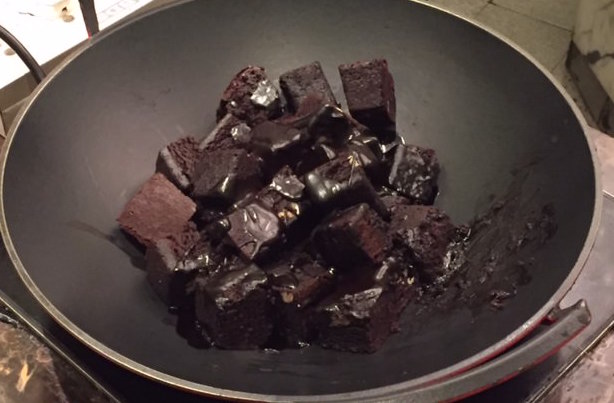 My India adventures are always filled with spiritual expansion, shopping, spa-ing and sight-seeing, but the true nexus, that remains the common thread and creates the most unity and JOY, is the food. When Kashmir sent me this India food article, I had to share it. If you book a flight now, maybe you can make it to India for dinner.

Why India is a nation of foodies

This article originally appeared in the BBC News on June 16, 2016.

Food and family are possibly India’s two biggest obsessions. The two define our identity and our personality to the point of both ridicule and delight, writes Ritu Agarwal.

For many Indians, “sitting down” with their family for a meal is one of the most important activities of the day.

As a country we firmly believe that the family that eats together stays together, and meal time is a strong source of family bonding, talking and sharing.

An Indian meal in fact, is always meant to be shared. Everyone eats a bit of everything.

And we tend to get all nostalgic and fuzzy about food.

Manu Chandra, one of India’s leading chef entrepreneurs, claims without a doubt that the cornerstone of his decision to work in the food industry stemmed from growing up in a joint family and their general celebratory attitude towards food.

His memories of “trips to the ‘subzi mandi’ (vegetable market) for seasonal fresh produce that defined daily menus, aunts sitting and peeling peas while watching TV with us, and karela (bitter gourd) being stuffed with a melange of spices and wrapped lovingly with thin thread before being pan seared and then unwrapped with painstaking patience to be eaten,” inspire his food creations.

Every community in India has its own recipes, spices and cooking techniques. Or regions and states have the same general dish – but with their own unique twist.

So the baniya (trader) community (to which I belong) in the northern state of Uttar Pradesh cooks very differently to the baniyas of Rajasthan.

For years India has struggled to translate this finicky food fastidiousness to restaurants.

Until very recently, fine dining was confined to the hallowed portals of glitzy five star restaurants, while for everyone else, eating out largely meant street food, dhabas (highway eateries) or cliched restaurants which dished out ubiquitous black lentils and butter chicken.

For those of us who grew up in small towns, social eating only took place at weddings and other celebrations.

But food is not just limited to feasting. Indians stay focused on food even when fasting.

Two major fasting periods in our community were Krishna Janashatmi, celebrating the birth of Lord Krishna, and Navratri, a nine day period that worships the Goddess Durga.

For the first festival, as children, even we joyously “fasted” with our elders as delicious fried treats – apparently made from certain ingredients that are permissible to eat even while you fast – were dished out all day. Even here “permissible” ingredients would differ from household to household, which meant that all in all, the fasting would end up becoming one long party which ended at night with some more amazing food for the entire family to sit down to.

Indians also use food as a beautiful way of honoring the dead and celebrating life.

When someone dies, it is tradition for a family to invite friends and neighbours on the 13th day for a meal comprising the favourite foods of the deceased. This meal, I was told, is meant to signify that the family should now stop mourning and go back to normal life.

But for a country that is so fixated on food we also can be pretty ill-informed about our fellow countrymen’s eating habits.

As someone from north India, I firmly believed every “south Indian” was vegetarian and ate only idli, vadas and dosas (rice pancakes and fritters).

When I shifted to the southern city of Bangalore years ago, I was shocked to discover that every region and every community from the four southern states had very diverse cuisines, robust with meats, including pork and beef.

Similarly, my new friends considered all north Indian food to be “Punjabi” (the state of Punjab having given the universally popular Dal-Naan-Chicken Tikka Masala to the world) and were equally baffled with my cooking.

Regional cuisine and local flavours are crossing state boundaries and India’s food scene is booming. Young chefs are innovating fabulously and after having found faithful followers in India are now taking their cuisines overseas.

From mum’s kitchens to restaurant kitchens across the country, food is India’s biggest obsession – quirky though some of our tastes may be.

Be it Desi (Indian) Chinese, the most popular foreign cuisine in the country, the British Raj influenced “continental,” or Mughali food – an entire concept birthed in the kitchens of the royal Mughal Emperors, we have been influenced by many cooking styles over the ages.

Yet, we are Indians and we like our food, our way. And not necessarily in small plates.

Previous Post People can live without religion,but they cannot…

Next Post Each thought, each action, in the sunlight of awar…